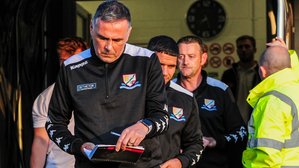 Steve Chettle will scale down the remaining numbers of pre-season friendlies to two, in the run up to the league opener.

We have had a very well thought out pre-season, playing five pre-season friendlies so far, but all focus for the next few weeks will turn to minimising risks and fine-tuning the squad for the build-up to opening day on the 19th September at home against Warrington Town FC.

The club has been hampered by a significant level of injuries so far in pre-season that has prevented Kane Richards, Matt Thornhill, Callum Chettle, Marcus Marshall, James Tague, Kyle Dixon, Wayde Hines, Alex Howes and Mackenzie Rooney from taking part, in not only some but like in the case of Richards all of pre-season so far.
All players are now back in training but Steve Chettle will be taking no risks as the squad builds fitness levels ready for opening day.

We will therefore only take two more external friendlies in the next three weeks. These will be Nottingham Forest U23s on Tuesday 8th September at 7.45pm and another friendly for Saturday 12th September. Further details to follow in due course.

Looking ahead at the remaining two friendlies and the start of the season Steve Chettle said: “We planned for pre-season early and with the delayed start to the season, we had to adjust training sessions and the games programme for pre-season.

“We started at the end of June and trained for three weeks with small numbers due to the outlined Government guidance. We had a week’s break and then set about planning our seven-week plan of pre-season with a tiered sessions and games programme. During both sessions and games, we have picked up some impact and soft tissue injuries. It is possible that the extremely long layoff between the end of last session and the stop start pre-season has been a contributing factor.

“We have up to present played five pre-season games and monitored minutes of all players. All players, minus Kane, were available for our first game, but as mentioned, we picked up annoying niggling injuries that hampered some players’ game time. We will now plan our final two games: Nottingham Forest U23’s and an opponent to be confirmed, on Saturday 12th September, before working in our own controlled environment up until the start of the NPL season at home to Warrington Town on Saturday 19th September.”